We appreciate all of our customers, but there are a few with whom we’ve developed special relationships over the years.  Here’s the story of one such customer.

About 10 years ago Solar National Air Propulsion (SNAP-Fan) of Arcata, California began developing an innovative product which would become the cornerstone of 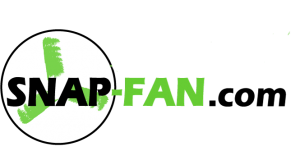 the company’s business.  It’s a quiet, versatile, and energy efficient solar-powered ventilation fan that can be used in any number of agricultural or off-grid applications.  In the original development the designer needed a specific fan blade to achieve all his goals, and after much searching he discovered Breeza Industrial.

“I needed someone who would make me about 50 fan blades in a very specific green color,” said Lucien Eddisford, the owner and designer of SNAP-Fan.  “I contacted Mike at Breeza and he said he could make them, but the minimum quantity was 3,000 blades.  He believed in my design and my product and he said he would get all 3,000 made and sell them to me as I needed them.  It took a few years to use them up, but now we’re using far, far more than 3,000 each year.”

A few years later Eddisford changed the design of the fan, including a patented clamping and support system for the motor.  He needed a manufacturer to water jet cut the aluminum support arms, and again he turned to Breeza.

“We had been thinking about expanding our fabrication abilities for several years.  This new request from SNAP-Fan allowed us to bring in a water-jet table, which opened up additional opportunities for us,” said Mike Fehlhafer, owner and lead engineer at Breeza Industrial.  “By saying yes to this project, we added a capability that has brought us a great deal of additional new business.” 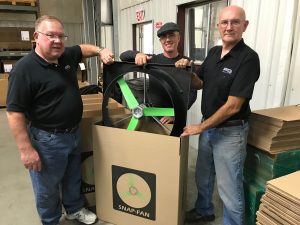 As business continued to grow for both companies, SNAP-Fan began running out of space.  Sales were out-pacing the company’s ability to manufacture at their facility, and Breeza Industrial was able to provide the help they needed.  In late October of 2017 SNAP-Fan began moving some of its production and distribution to Breeza’s facilities in Utica, Nebraska.

Even though the two businesses are separated by 2,000 miles, they’ve used technology to collaborate on prototype development and project planning.  Constant communication between the engineering and leadership teams at the two companies has helped each business grow.

“It’s been fun to watch this happen,” Fehlhafer said about the way the companies have grown along-side each other.  “We supply fans, machined parts and fabricated parts to companies in all kinds of industries, but working with SNAP-Fan has given us opportunities to add capabilities and help out a great customer at the same time.”

This message is only visible to site admins

PPCA Error: Due to Facebook API changes on September 4, 2020, it will no longer be possible to display a feed from a Facebook Page you are not an admin of. The Facebook feed below is not using a valid Access Token for this Facebook page and so will stop updating after this date.

If you're out at the World Ag Expo in Tulare California next week, come by the Breeza booth (3524 and 3624) to meet Dave. He's a darned nice guy, and he helps people all over the world solve their manufacturing problems. ... See MoreSee Less

Yes, we bend and we cut, but putting the pieces together the right way is what shows a true craftsman. That's where our welders come in. They are the best in the area, and we're proud to show off their work. ... See MoreSee Less

Breeza Industrial will be teamed up with Snap-Fan next week at the World Ag Expo to release our newest product! Come by 3524 and 3624 to see what all the hype is about. ... See MoreSee Less

Breeza Industrial played a huge role in developing this new product, the EC20 MAX by Snap-Fan. It was smartly designed so you can adjust the amount of air that's moving in your greenhouse or cattle barn for happier plants and animals and an increased yield. No one else has this technology, and we're excited for its release in February! ... See MoreSee Less

If you're ever wondering how Breeza can build the exact fan you need and have it out the door in 24 hours, here's a 90 second video that explains it from call to shipping. ow.ly/D6sn50kpj3h ... See MoreSee Less