What Are Axial Fans Used For?

Axial fans aren’t a new thing.  They are the oldest and most common style of fan out there.  And the actual physics aren’t anything different than you might expect.  The fancy name simple means a fan that moves air on the same axis as the power source for rotation.  A few common applications you are familiar with are a box fan or a ceiling fan.  Both applications push air parallel to the axis of rotation and each one cools the space around it by adding increased air flow. 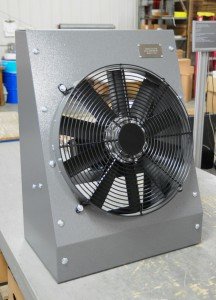 An engine cooling unit. We really shine when it comes to sheet metal projects.

In an industrial setting applications for axial fans abound.  One of the most common is cooling the power source of machinery.  Axial fans are often mounted to a motor to either pull air over the motor to cool it, or to push hot air away from a motor to cool it.  Think of a radiator on a car.  It’s an axial fan.

We sell axial fans into too many industries to count.  Our fans are on generators, air compressors, diesel engines, and just about any other type of directional cooling you can imagine.  But we design and sell fans for other applications that have nothing to do with cooling, too.  Our fans are currently being used in snow-making machines and hovercrafts.

If you’re interested in further education on the matter, take a look at our axial fan page to see a few photos with included descriptions for use.